Welcome to
Frame It Productions

We provide a variety of video and photography services to cater for
business requirements, promotional needs and events all over Ireland.

We also produce videos for conferences and training courses so no client will miss an event provided by you.

We pride ourselves in understanding our clients’ products and services, and working with them closely to create images that reflect their marketing needs.

Known for our approachable personality, we’re easy to work with and will make your experience in front of the camera as easy as possible.

At Frame It Productions our clients are the centre of everything we do. This means being accessible, responsive, creative and efficient.

Our first priority is to simplify clients’ lives by responding to their needs and achieving their goals. 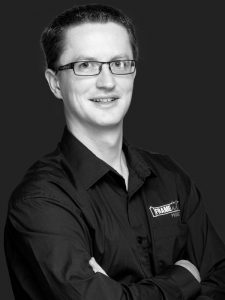 Head of Post-Production and Director of Photography

Philip Lewis is a graduate in TV and Film Production from the National Film School in Dun Laoghaire. He is highly skilled in the technical aspects of production including camera operation, editing and final delivery covering various formats. On a typical project, Phil oversees the editing. His skill lies in piecing together the footage to tell the desired story and he uses his creative resources and design skills to add music, graphics, text and voiceover as storytelling tools. Phil is very experienced in the correct implementation of brand guidelines, having filmed and edited, with Frame It, videos for clients such as Kerry Group, Kildare Arts Service, AIB and Vodafone. Phil comes from an artistic background with film, TV and music video production credits. He recently edited ‘All About Eva’ a feature film which premiered at the Jameson Dublin Film Festival. 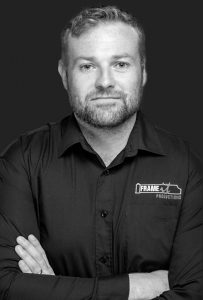 Head of Video Production and Development

Richard Kearney is a media graduate with a BA Hons Degree in Scriptwriting from The Bournemouth Media School. Richie is a trained screenwriter and camera operator who has worked on programmes broadcast on RTE. Since completing his degree, Richard worked in various TV and film production companies in Dublin. He set up Frame It Productions with Philip Lewis in 2007 to create videos for businesses and organizations as well as to further their own original-fiction short and feature films. Richard is the first and last point of contact for any project and oversees all productions from start to finish doubling as both producer and production manager. He works with clients on their vision for their video message.

What our clients say

The video produced by Frame It Productions really helped to position our Tone of Voice initiative. The voxpop style used – of real people giving real feedback – summed up in two minutes why the initiative was so important in AIB . Thanks for your help

I used the services of Les Kelly from Frame it Productions for a Photo shoot of our staff to use on both printed and digital media. I found Les to be fantastic on the day. He really put us at ease and got some excellent shots. We also commissioned him to produce an image of our offices in the square Maynooth for a brochure and again we were highly impressed by the results, He listened, understood the brief and stayed with the project until it was perfect.

Richie and the team at Frame it Productions have consistently delivered the highest quality video materials, on time and on budget. The standard of service provided is excellent and we look forward to working with Frame It Productions on future projects.

The guys at Frame It make video production very easy for me. They put all of the contributors at ease while filming and make sure they capture everyone at their best. The result is a professional piece of film that adds a different dimension to our events and gets our message across.

Kildare County Council has acquired the multimedia and production facilities of Frame It Productions for a number of projects in relation to Road Safety, Emergency Service and also the Arts Section. They have provided Camera Crews, Sound Engineers, actors and personnel both on-site and in-house to produce our suite of road safety education videos and tutorial videos and photography. It is my strong view that Frame It Productions have the capability, vision and facilities to deliver a fresh new look to any production, and with their extensive contacts of list, I am very happy to continue with their professional services.

We were redeveloping our website www.managementworks.ie and we wanted to include eight video testimonials from business owners who had completed ManagementWorks programmes already. One of our suppliers recommended Frame It Productions. We gave Richard the brief, pointed him in the direction of our clients and left him to it. They came back with eight superb videos, on time and within budget. We were delighted with the outcome and will work with them again.

Each year we organise a corporate golf event for our clients. With over 90 people attending the day, it’s always a memorable occasion. This year we decided to get a video done for the day along with some photography. Having interviewed a number of companies for this requirement, ‘Frame it productions’ came out on top in all aspects. Their professionalism, patience, creativeness, and overall co-operation for our many demands have really made our day extra special. We now have a 2 minute video clip which we can send to all our customers who attended the day & we can also use this clip for next year’s invites. Each year we want to give our clients a unique experience in attending our Golf day, and this year Frame it productions helped deliver on that. That’s again to Richie & team..! Great Job..!

We recently brought frame it Productions in to do three high profile customer testimonial videos. Richard and the team were extremely professional in everything they did. From the very first meeting, where we presented some ideas, to the end-product after editing, Frame It went above and beyond what they were asked to do. We placed serious demands on them regarding the content to be captured, key messages we wanted to communicate, aswell as tight deadlines. They exceeded our expectations and we are extremely satisfied with the videos the produced and both VEI and our clients; Ornua, K Club and Ardmore Studios would highly recommend them for future work.

The Coach Tourism and Travel Council engaged in the services of Frame it Productions to supply Video and Photo content for The Coach and Bus Show in the RDS. The CTTC were very satisfied with the product provided by Frame it Productions and will definitely consider them for future projects.

Some Companies We’ve Worked With

Have you an upcoming event or want to communicate with your audience more effectively?

Then why not get in touch? We look forward to hearing from you.

This website uses cookies to improve your experience while you navigate through the website. Out of these, the cookies that are categorized as necessary are stored on your browser as they are essential for the working of basic functionalities of the website. We also use third-party cookies that help us analyze and understand how you use this website. These cookies will be stored in your browser only with your consent. You also have the option to opt-out of these cookies. But opting out of some of these cookies may affect your browsing experience.
Necessary Always Enabled
Necessary cookies are absolutely essential for the website to function properly. These cookies ensure basic functionalities and security features of the website, anonymously.
Analytics
Analytical cookies are used to understand how visitors interact with the website. These cookies help provide information on metrics the number of visitors, bounce rate, traffic source, etc.
Others
Other uncategorized cookies are those that are being analyzed and have not been classified into a category as yet.
SAVE & ACCEPT